Thysanoptera (thrips) is an order of insects currently comprised of 7400 species, 1200 genus-groups, and nine living families with three fossil families (Mound, 2005). Two major suborders are recognized in Thysanoptera: Tubulifera (thrips with abdominal segment 10 tubular in shape) and Terebrantia (thrips with abdominal segment 10 subdivided ventrally). Thrips are commonly regarded as flower-living, though a wide range of biologies have been documented including feeding on leaves, flowers, fungal hyphae, fungal spores, mosses, predators of other small arthropods (Mound and Marullo, 1996) and in one instance, as an ectoparasite of other insects (Izzo et al., 2002). It is well known that the classification of Thysanoptera is generally in a state of chaos (Morris and Mound, 2003), and the monophyly (common ancestry) of the suborders and families have never been formally established. Moreover, phylogenetic (evolutionary development) relationships are virtually unknown, and there has yet to be a formal phylogenetic hypothesis put forth for this group. Given that thrips have such a wide diversity, combined with their unique and highly rearranged mitochondrial genomes, (Shao et al., 2002) a robust phylogeny is essential to better understand the evolution and diversification of this order.

A total of 37 taxa were selected from 10 families representing both suborders Tubulifera and Terebrantia. Six of the nine recognized families were included in this analysis. The tree was rooted to Hemiptera and Psocoptera which are related insect groups.

Correction of nucleotide sequences and assembly of contiguous sequences were performed using the computer program Sequencher 4.2.2 (Gene Codes Corporation. Ann Arbor MI). The data were partitioned into conserved and non-conserved regions based on the initial Sequencher alignment and then the alignment was refined using the program MAFFT (Katoh et al., 2005). The alignment was analyzed under parsimony.

This analysis includes a relatively modest sample of thrips diversity and only three genes, but the results are encouraging. A more thorough analysis including a broader selection of taxa combined with a wider range of genes is likely to provide additional insights into the phylogeny and evolution of this important insect order. 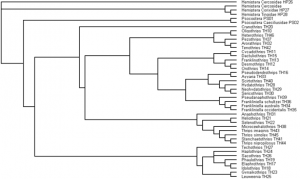