The Rubens flame tube is a teaching demonstration that is over 100 years old that allows observers to visualize acoustic standing wave behavior1. Flammable gas inside the tube flows through holes drilled along the top, and flames are then lit above. The tube is closed at one end and is driven with a loudspeaker at the other end. When the tube is driven at one of its resonance frequencies, the flames form a visual standing wave pattern as they vary in height according to the pressure amplitude in the tube (see figure 1).

Although the basic performance of the tube has been explained2, I researched a previously unreported characteristic of the tube: resonance frequency shifts. I observed that this phenomenon involves an upward shift of the natural frequencies of the lower modes from what would ordinarily be expected in a closed-closed tube. Results from a model suggest that the shift is primarily due to a Helmholtz resonance effect created by the drilled holes.

One of the main tasks I had to do in this research was to compare the model to the experiment. The model was created using a waveguide circuit that incorporated the relevant dimensions and geometry of the tube. The drilled holes were included in the model, thus integrating the Helmholtz resonance effect. If our hypothesis was to be correct, we expected the model to match the experiment well. The experiment involved the construction of two new flame tubes to benchmark the model. In order to compare them, I took frequency response measurements of the tube with the flames on and also generated a frequency response plot as predicted from the model. One problem that we ran into was that the frequency response plots for the experiment and for the model were not matching up very closely. They were misaligned and misshapen (the quality factor was off). After going through everything again, we noticed a bug in the code that was modeling the loudspeaker. After the bug was fixed, the alignment dramatically improved.

See figure 2 for the comparison of the experiment (observed) to the model (predicted). 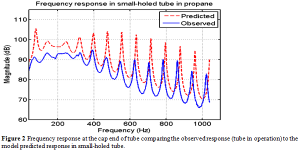 The horizontal alignment of the peaks between the observed and predicted graphs is what is important in analyzing the accuracy. The graph shows the accuracy of the model and thus the accuracy of our hypothesis. There are a few bumps in the observed graph that do not appear in the predicted graph (notably between 200 Hz and 400 Hz). The source of these bumps is not clear, but further research would be good to try and understand their cause. There was other research conducted on this project and it was conclusive, but there is not space to elucidate here.

After concluding the experimental research and analyzing the results, I had the opportunity to present this research a number of times. I presented at a BYU Acoustics Research Group meeting among peers; I also presented at the BYU Spring Research Conference. I lastly presented at the meeting of the Acoustical Society of America in Salt Lake City in June 2007. I presented in the education in acoustics session and garnered much interest among professors and acousticians at the meeting. It was a good experience. Also, my mentor and I are currently in the process of submitting the research as a paper to the Journal of the Acoustical Society of America. There, it will be accessible to anyone interested in learning more about the flame tube. In addition, a second paper will be published in the American Journal of Physics which will be geared more towards guidelines for building tubes. That way, prospective demonstrators of the tube could build their tube according to what physics principles they want to show (i.e. making the holes smaller reduces the Helmholtz effect while making them bigger accentuates it).

Overall, the research of the Rubens flame tube was a success. Our hypothesis proved to be correct; the research was exposed to the scientific community; and two published papers will come of it. I sincerely thank the Office of Research and Creative Activities for their support in this research in helping it come to pass.