In Jet engine noise is a large and complex area of research due to the intricacies of the variety of different mechanisms that produce noise traveling in different directions. The dominate noise source is called turbulent mixing noise (TMN) which is created by the interaction of the column of air mixing with the ambient air. Two types of TMN exist: large-scale TMN, the dominant noise source that travels away from the aircraft in the aft quadrant and fine-scale TMN that travels in all directions1. The second type of noise is known as broadband shock-associated noise (BBSAN), which is generated by the interaction of the large-scale TMN with the shock cells in the exhaust from a supersonic jet flow. BBSAN travels at an angle directed toward the side and front of the aircraft. Both BBSAN and TMN are postulated to originate from overlapping regions, even though they propagate in different directions as illustrated in Figure 1. The purpose of this research is to create equivalent numerical models that represent the sources of these noise types.

To create equivalent acoustic source models for these types of noise, a computational method known as beamforming is employed. Traditional beamforming takes acoustic signals recorded from multiple microphones and uses the fact that each microphone picks up a signal at a slightly different time to pinpoint source locations and levels. However, due to the complexities of jet engine noise, traditional beamforming methods do not work, so more advanced beamforming methods need to be employed. Though there are many different advanced methods available, the hybrid method2 (HM) of beamforming was employed in this study. It is known as “hybrid” because it attempts to find many sources at once while also employing advanced regularization methods to account for the complexities in jet engine noise.

The HM beamforming algorithm was applied to noise recorded in 2013 to a tied-down F-35B aircraft taken by an array of 71 microphones placed on the ground in a line (more details on the measurement procedure are found in James et al.3). The HM beamforming algorithm produced source strengths along the jet centerline across many frequencies. The regions with highest source levels are shown as a function of frequency in Figure 2 by the purple region. However, applying the HM beamforming algorithm to the full array was not sufficient to obtain source locations of BBSAN and TMN since they originate from overlapping regions.

These results show that these different noise sources indeed come from overlapping regions and frequencies. For the upper subarray, sources are localized closer to the nozzle with some high concentration above 500 Hz, showing the localization of BBSAN. There is significant overlap for the middle subarray at frequencies above 200 Hz, but it doesn’t extend as far at lower frequencies. For the final subarray, the downstream sources are found to be generated farther away from the nozzle than any of the other sources. Yet, each and every one of these sources has some overlap with the full array, confirming that BBSAN and TMN originate from the same regions even though they have different characteristics and propagation directions.

To conclude, the research done in this study has confirmed that noise present in different regions with different characteristics originate from overlapping source regions. Subarray results cover the source region for the entire array, but the first and final subarrays extend the source regions either closer or father away from the nozzle respectively. As a whole, subarray source models provide a better picture for equivalent acoustic source distributions for BBSAN and TMN. But most importantly, this research helps provide models that can be used to predict the sound level from different types of noises at different locations away from the aircraft. It also provides regions where future research should target for noise reduction efforts. The preliminary results from this study were presented at the national conference of the Acoustical Society of America (May 2018), more detailed analysis will be presented at the next meeting (Nov 2018) and reported in a peer-reviewed journal article. 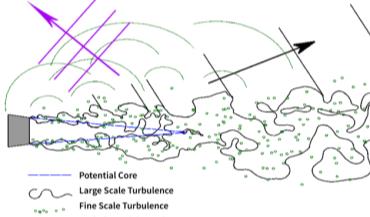