The Grand Tour was a quintessential part of eighteenth-century English culture. A trip that lasted from six months to three years, the purpose of this journey was for young men to supplement their education with exposure to the art and architecture of the Italian Renaissance as well as Ancient Greece and Rome. While the Tour was traditionally traveled by young men, many women also took the journey to the “continent.” The purpose of this project is to explore the experience of eighteenth-century English female travelers during the Grand Tour through artist Pompeo Batoni’s portraits of female grand tourists, and to compare these female travelers’ experience to their male counterparts through the medium of portraiture.

Because the genre of Grand Tour portraits was so popular and extensive, I narrowed my research down to the works of Pompeo Batoni, a popular Grand Tour portraitist living in Rome at the peak of the Grand Tour’s popularity. As I searched through a comprehensive catalog of Batoni’s paintings, I discovered that Batoni had a tendency of portraying his sitters in certain default attitudes, and that these “defaults” differed between men and women.

My aim in this project was to research the differences in the Grand Tour experience between male and female English travelers in the eighteenth century through the differences between male and female sitters in Batoni’s portraits. An integral part of this comparison between image and experience was to experience the Grand Tour myself. I traveled, under the guidance of Dr. Martha Peacock, and alongside seventeen other art history students, to the cities traditionally considered as the most important destinations of the eighteenth-century Grand Tour—Athens, Rome, Venice, Florence, and Paris—and stopped at other cities of note along the way to gain a deeper understanding of the role that art played in eighteenth-century English travelers’ Grand Tour experience.

As our travels on the Grand Tour continued, my perspective and expectations for my research evolved dramatically. Thanks to the guidance and knowledge of Dr. Peacock, I gained greater perspective on the challenges and obstacles female travelers faced in the eighteenth century. This changed perspective led me to change the direction I took in my research. Instead of focusing on a comparison between male and female Grand Tour portraits, I narrowed in on just one portrait: that of the Lady Margaret Georgiana Poyntz Spencer, whose portrait was painted by Pompeo Batoni in 1764 (figure 1). Hers is an intriguing portrait because Spencer chose to be portrayed in the style of Batoni’s male Grand Tour sitters. For example, Spencer’s portrait shows her seated at a table upon which sheet music and a musical instrument are laid. This reflects Spencer’s reputation as an accomplished composer and musician and parallels the tendency of male grand tourists to pose in front of shelves and tables filled with symbols of their accomplishments. In the background of Spencer’s portrait, the Roman Colosseum can be seen through a window. This open window and depiction of iconic architecture of the Grand Tour is unique to Spencer because such a feature is traditionally found only in Batoni’s portraits of male Grand Tour sitters (the rest of his female sitters are placed before a curtain, a blank wall, or a pastoral scene).

With a new direction in my research, I pored over Batoni’s catalog and scoured library catalogs, books, and online databases to learn more about Spencer, about whom little is written, especially regarding her travels abroad. While in London, I visited the British Library, where I located and read through Georgiana Spencer’s writings, which she wrote during her time abroad from 1763-1764, the trip during which Batoni painted her portrait. These writings consist of a travel journal and several collections of letters written to family members and friends.

The longer I spent in the Manuscript reading room at the British Library, the more manuscripts I discovered relating to Spencer’s travels, and at the end of my trip I had gathered much more material than I had anticipated. As I continue to read through Spencer’s journal and correspondence, I hope to continue to make connections between Spencer’s portrait and her time as a grand tourist, and to gain a greater understanding of the woman behind such a revolutionary portrait.

As previously mentioned, not much is written about Lady Spencer. Using her portrait as the basis of my research on gender, portraiture, and the Grand Tour has proven to be both enlightening and challenging due to the lack of scholarship on her experiences as a traveler. As I continue to read through Lady Spencer’s writings and correspondence, I will make connections between her travels and the iconography within her portrait, thus revealing her bold choice to place herself, a female traveler, within a traditionally male space. 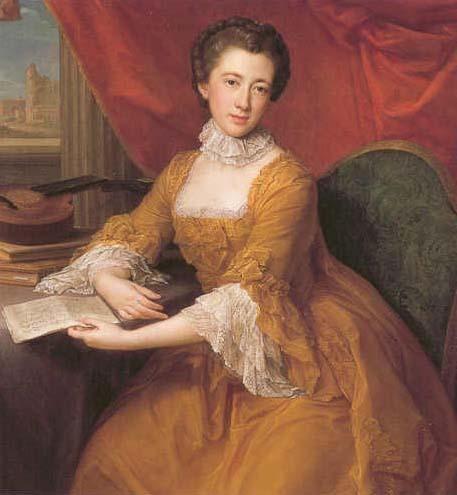