Alcohol addiction affects the lives of millions of people worldwide. In the US alone, an estimated 28 million are currently undergoing treatment to recover from the effects of alcohol abuse at the cost of over 249 billion dollars. The disease has dire consequences for those affected, as well as their families and communities. Despite this, the mechanism of alcohol addiction formation remains a question. One prominent theory relies on the mesolimbic circuitry of the brain, commonly referred to as the reward circuit. This region is made up of two key brain regions, the Nucleus Accumbens (NAc) and the Ventral Tegmental Area (VTA). In a basic model, dopamine releasing neurons project from the VTA into the NAc, where dopamine release is correlated with pleasure. During addiction, this dopamine release gets dysregulated, resulting in addiction symptoms. Current research shows that one key, understudied regulator of dopamine release are microglia cells. Part of the brains resident immune system, these small cells are commonly activated by a variety of diseases. Once active, they release proteins that modulate many areas of the brain, including dopamine release in the NAc. Beyond activating microglia, some dopamine related diseases such as Alzheimer’s, Huntington’s, and stimulant addiction trigger an influx of peripheral immune cells that affect disease response. Often referred to as infiltration, this uncommon breach of the blood brain barrier links the peripheral and central immune systems, which may illuminate some of the missing steps in alcohol addiction formation. The purpose of the current study was to determine whether the formation of alcohol addiction involves infiltration.

Animal Subjects: C57BL/6J and MaFIA mice were bred and cared for in accordance with the National Institutes of Health Guide for the Care and Use of Laboratory Animals. For each methodology to be employed, animals were treated in strict accordance with the Brigham Young University (BYU) Animal Research Committee (IACUC) guidelines, which incorporate and exceed current NIH guidelines.

Isolation of Brain Microglia and PBMCs: Following anesthetization of mice with isoflurane, animals underwent transcardial perfusion with ice cold PBS. Once perfused, brains were removed from the skull and placed in ice cold PBS and sliced Targeting the NAc and VTA, horizontal slices were placed in an incubation chamber container containing PBS. Tissue dissections of appropriate brain regions were then extracted from the slices and transferred into microcentrifuge tubes containing Roswell Park Memorial Institute medium (RPMI). The tissue was then ground in a Dounce homogenizer containing RPMI until the suspension was homogenous. The mixture was resuspended in 30% Percoll and layered onto 70% Percoll and centrifuged. The different densities of the solutions caused the single cells to move to the interphase between the 70% and 30% layers. The myelin and other debris were then removed from the upper portion, and the interphase was extracted and transferred to 5 ml round bottom FACS tubes and stored at 4°C.

Macrophage Transplant: To extract MaFIA mouse GFP+ peritoneal macrophages, a postmortem peritoneal lavage was performed. Following CO2 euthanasia, animals were mounted on Styrofoam blocks and secured in place. The abdominal skin was cut away while ensuring that the peritoneum remained intact. Once the peritoneum was exposed, a 27-gauge needle was inserted into the peritoneum, and 5 ml of ice-cold PBS was injected into the area. Injectate was then removed from the peritoneum using a syringe with a 25-gauge needle on the most lateral section of the peritoneum. The solution was then centrifuged at 3000 rpm for 7 minutes to extract the cells. Following extraction, MaFIA macrophages were resuspended in ~100 μl PBS, and the solution was then injected into C57BL/6J mice via the lateral tail vein.

C57 mice were injected with macrophages extracted from MaFIA mice. The c57s were subsequently injected with varying concentrations of alcohol. After allowing an hour of recovery, mice were sacrificed, the brains extracted and prepared for flow, and acquired on the cytometer. We found that an increased dose of alcohol decreased infiltration of peripheral immune cells. The finding that alcohol decreases infiltration was surprising, although not entirely contradictory to the current literature. Other studies have shown that following chronic intermittent exposure to alcohol, infiltration was increased. Our results show just a single dose, and follow a common pattern in alcohol addiction formation, namely that acute effects differ from long term ones. One possible explanation is that infiltration decreases immediately following alcohol consumption and after repeated exposure, an opponent process come in to play. Another possibility is that peripheral immune cells responding to alcohol consumption infiltrate other tissues throughout the body and are drawn away from the brain, but after repeated exposure, infiltration will occur in the brain leading to withdrawal symptoms. Because this study looked at acute alcohol administration, our results appear to be more relevant to short-term alcohol effects, compared to chronic abuse. 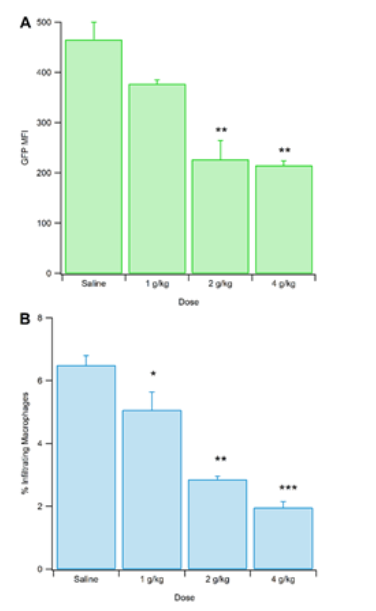 Our data contribute to the growing body of scientific literature that claims the immune system has a key role in the formation of addiction. We conclude that microglia show a clear decrease in infiltration in response to acute alcohol use, which effect remains to be further studied and explored.