Introduction
The globalized Late Bronze Age world was one of sophisticated trade, conquest, and foreign
influence in many of the Old World’s nations. Archaeological excavations in modern Israel have
revealed numerous artifacts of Egyptian origin and style within Canaan’s Late Bronze Age. The
Late Bronze Age in Canaan encompasses the 18th through 20th dynasties in Egypt, and evidence
of Egyptian control in Canaan is manifest throughout the reigns of Tutmoses III, Amenophis III,
Akhenaten, Ramses II, and Ramses III. Egyptian administrative centres have been recorded at
Megiddo, Beth Shean, Jaffa, and Deir el-Balah. My intent was to determine the nature of
Egyptian-style artifacts at these sites and how they relate to the relationship between a Canaanite
elite and the Egyptian ruling class. Although there is some evidence of the importation of
Egyptian goods as luxury items, especially at cities such as Lachish, I found that Late Bronze
Age Canaanite peoples of the working class retained their own iconographic representations and
styles with very few exceptions. Temples, stelae, statues, and jewellery found in the region
conclude that Egyptian iconography penetrated only into administrative and cultic centres
established by Egypt. Canaanite culture as a whole, however, did not extensively adopt an
Egyptian iconography or cultural expression and there is little case for Egyptian infusion into the
presentation of Canaanite identity.
Methodology
I began my research wanting to know if Canaanite groups adopted Egyptian iconographic
practices while under Egyptian rule. Many Late Bronze Age excavations throughout Canaanite
sites revealed scarabs and Egyptian-styled beads. I spoke with professors throughout the United
States who helped me become familiar with the literature. My research was primarily conducted
by seeking old journal articles for objects that have not received adequate publication. As I did
this, these objects lined up with sites that were known to have strong Egyptian presence—such as
Beit Shean or Megiddo, sites that were already known to have a large quantity of Egyptian items.
Results
I found that cities such as Beth Shean, Megiddo, and Deir el-Balah are often used as evidence
that the Canaanites had adopted Egyptian iconographic practices. This, however was not a
reliable claim, for these cities had a strong Egyptian presence. Little, if any, Egyptian
iconographic images exist at sites where there was not an Egyptian presence. 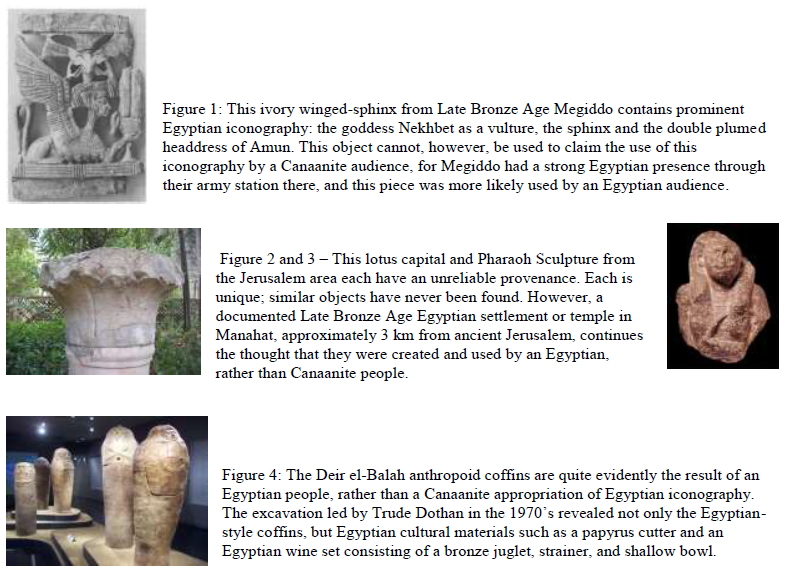 Discussion
None of the above objects can be used to point toward a Canaanite use of Egyptian objects.
Egyptian armies were stationed at both Jerusalem and Megiddo, while Deir el-Balah, located in
the Gaza area and much closer to Egypt than the other sites, was more likely an Egyptian
settlement between the lands of Egypt and Canaan.
Conclusion
The sites and artifacts discussed here do not reference every Egyptian presence in ancient
Canaan. Other cities, such as Ashdod, Ashkelon, and Jaffa also had significant Egyptian
presence. Though abundant Egyptian artifacts are common throughout the country, due to
Egyptian control over Canaan, they are often associated with Egyptian administration or the
overseeing Egyptian population or luxury imports. Canaanite goods were still manufactured and
little of the Egyptian iconography was integrated into the local style. Egypt did not have a
positive reputation with Canaan; the desire for distinction drove Canaan to maintain an exclusive
and prominent Canaanite iconography.