We’ve studied the light curve of the blazar object, Markarian 501 (Mrk 501). This project is important because it helps refine the still developing standard model of a galactic nucleus and could aid the search for binary black holes.

Blazars are thought to be spinning, super-massive black holes producing a relativistic jet of protons, electrons, and gamma-ray photons towards Earth. Earth, of course, is a safe distance away (456 million light years for Mrk 501), but we can still study the jet’s intensity to learn about the black hole. A light curve is a plot of brightness vs. time, and sinusoidal variations in a light curve are generally a signature of orbital dynamics. For blazars, sinusoidal variations in brightness may have other explanations, but there is a lot of supporting evidence from other authors that Mrk 501 contains a binary black hole. In other words, the black hole producing the jet is in orbit with another black hole of similar size. Imagine someone is spraying you with a garden hose while moving it in a circle.

Jet observations of Mrk 501 in 1997 show sinusoidal variations with a period of 23 days. This does not mean that the orbital period is 23 days. Because the jet is traveling towards the observer at a relativistic speed, we measure changes to occur much more rapidly that they truly are. In 2000, Rieger & Mannheim, by estimating the jet velocity to be around 99.5%–99.7% of the speed of light, calculated that measured 23-day period would correspond to a binary black hole orbital period of 6–14 years.

Using the Remote Observatory for Variable Object Research (ROVOR) telescope and the West Mountain Observatory (WMO) 0.9-meter telescope, images have been taken of Mrk 501 from 2009– 2017 in optical light. Whereas gamma rays come from the jet, optical (near visible) light comes from the core, which is relatively stationary. So, any significant variations in brightness should lack relativistic effects.

In our light curve, we find significant evidence for a sinusoidal variation with a period of ~1850 days, or about 5–6 years, in addition to an overall upward trend. Smaller, less sinusoidal variations also seem apparent, but are less consistent, ranging roughly from 60 to 140 days in length. 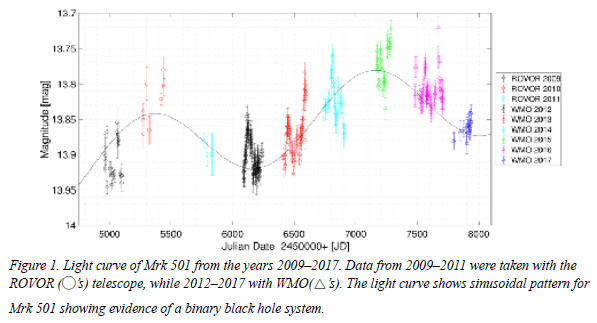 We have calculated that, if these harmonics follow the relationship used by Reiger & Mannheim, then a jet velocity of 99.527% of the speed of light relates them to intrinsic periods of roughly 20.3, 10.1, and 6.5 years—closely matching the optical observations.

After comparing our results with data from other authors, we conclude that optical observations reflect the intrinsic periods relativistically tied to the periods in gamma ray observations and, thus, constrain the jet velocity closer to 99.5% of the speed of light. This slight refinement can be significant when calculating other parameters, such as the mass of each black hole, the separation between the two black holes, etc.

Further investigation could lead to a gravitational wave profile for Mrk 501 and reveal signature characteristics of similar binary black hole candidates. As more data is gathered, the ranges for the black hole orbital period will become refined.