Telomeres are repetitive DNA sequences found on the ends of chromosomes that serve to protect the genes contained within each chromosome. As a cell replicates, its telomeres shorten, eventually triggering cellular senescence or death. This serves as a tumor suppressive mechanism by limiting the proliferation of cells. All cancers must overcome this growth limitation by acquiring mutations that permit telomere elongation. Most cancers achieve this by acquiring activating-mutations in an enzyme known as telomerase. Some cancers do not express telomerase, and maintain their telomeres by other means including a mechanism called “alternative lengthening of telomeres” (ALT). However, there exists a subset of cancers that possess neither of these telomere-maintenance mechanisms.

Telomeres functions by binding a set of proteins collectively known as shelterin, which regulate telomere length maintenance and serve to protect the chromosomal termini from being recognized by the cell as broken DNA. We recently identified several single-codon variations within the shelterin component TRF1 in a sample of lung cancer genomes that lacked either telomerase or ALT activation, suggesting that the telomeres of these cancer samples were maintained by a potentially novel mechanism. These variations were located in the DNA-binding domain of TRF1, called the Myb-Domain, which was previously shown to be necessary for TRF1’s binding to telomeric DNA. The wild-type sequence of the affected codons is extremely conserved among many species, suggesting that these residues may play a functional role in the protein. The discovery of a new mechanism of telomere maintenance would elucidate potential therapeutic targets in associated cancers and enhance our understanding of the process of malignant transformation.

We selected two of the most common mutations we discovered in TRF1 for study invitro, to characterize the effects of these mutations on the behavior of TRF1 and the telomeres. We created cell lines which conditionally-expressed the variant forms of TRF1, W383R and G399V, along with two controls, WT (wild-type control), and ΔMyb (Myb-domain removed). Previous research showed that removal of the Myb-domain prevented TRF1 from properly binding to the telomeric DNA. This lead us to hypothesize that the TRF1 variants we selected might disrupt the binding of TRF1 to the telomeres. We therefore included the ΔMyb form which had the Myb-domain removed as a negative control for TRF1-telomere binding.

We then performed Western blotting on protein extracts from our cell lines to visualize the expression of our TRF1 constructs. According to recent literature, TRF1 degradation is regulated by its DNA-bound state. We treated our cell lines with a proteasome inhibitor, MG132, to demonstrate whether our TRF1 variants were being degraded in the case of loss of DNA binding (Figure 1). The results show significant degradation of the W383R and G399V variants, with greater accumulation upon inhibition of the proteasome. The same is true for WT, likely due to the overexpression of the protein resulting in mostly unbound WT. ΔMyb showed no noticeable degradation, possibly due to the necessity of the Myb-domain in its ubiquitination.

We also performed immunofluorescent staining of the cell lines for TRF1, TRF2, and DAPI for nuclear staining (Figure 2) to determine whether the DNA-binding capability of our variants was in fact lost. This allowed us to visualize the localization of TRF1 in comparison to its binding partner TRF2, and whether they co-localized at the telomeres. Yellow puncta in the merged image are evidence of telomeric colocalization of both TRF1 and TRF2. The W383R and G399V images show only red TRF2 puncta, demonstrating that the TRF1 variants are not properly localizing to the telomeres.

We also measured the proliferation of the cells using an automatic cell-counting incubator (data not included). The cells with induced expression of these TRF1 constructs did not show any obvious signs of changes in proliferative health.

We learned from the western blot that the proteasome was involved in the degradation of the TRF1 variants of interest. In combination with our immunofluorescent staining that shows lack of telomeric binding of these variants, we believe that these single mutations abrogate the ability of TRF1 to bind to the telomeres. It is well documented that removal of TRF1 has significant effects on the health and behavior of the telomeres. We sought to perform additional tests to examine any possible connections to cancer-promoting signs or mechanisms, but in July 2017, Dr. Alder moved his laboratory to the University of Pittsburgh School of Medicine. However, good data was obtained that these mutations were not simply a statistical artifact, but actually have an effect which may possibly be cancer promoting, namely, the loss of TRF1 at the telomeres. How this may be cancer promoting we are currently unsure. Dr. Alder’s research continues at Pitt where he will be obtaining help from several graduate level students to continue my work. 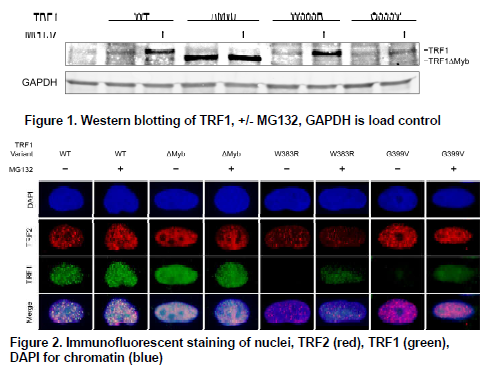