The purpose of this project was to develop a new type of optical trap based on Poisson’s famous “Poisson Spot” experiment. The two main methods currently for creating a photophoretic trap are to use dark spots created by spherical aberration (see Fig. 1) or to use vortex beams. In the case of a trap caused by spherical aberration which occurs when using spherical lenses to focus a beam, the particle stays in the dark regions due to photophoretic forces [1,2]. Vortex beams are created by doughnut modes of a laser beam. These are modes of the laser which can be created using holograms or phase plates to shape the profile of the beam into a doughnut shape with the dark middle being surrounded by a bright ring [3]. When these doughnut modes propagate downstream, they create a vortex within which multiple particles can be trapped. The problem with this method is that particles are free to move up and downstream along the beam. For applications where the particle needs to stay still at a fixed point, this is not the best method to use. 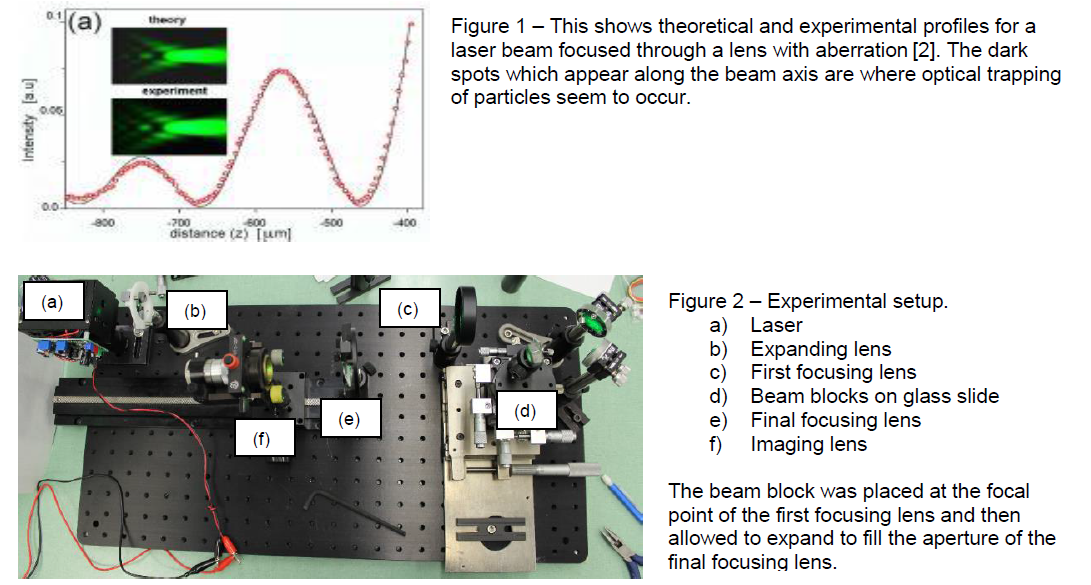 Our proposed trap would, in theory, allow for stable trapping in all three dimensions by eliminating the center of the beam in an oval shape. This kind of trap can be created placing a block in the beam upstream from the focusing lens at a point where the beam is focused by another previous lens.

Last winter I got several differences size disks printed onto a glass slide. Using the setup shown in Fig. 2 above, I could see if the setup was creating the dark spot in the focal point I was hoping to get. It turned out that there were a few dark spots created in the beam, just not right in the focal plane like I had hoped.

Since it did not appear that this setup would give any obvious advantages by creating the desired central dark spot, I moved on to testing the vortex trap. I spent two months trying to make my own spiral phase mask to no avail. I asked for prices from optics companies to see how much it would cost to have a phase mask made. It was well outside the research group budget so we tried to make one using a holographic device we had in the lab. This also did not work so I decided to move on without a vortex beam.

Upon my return from an internship over the summer, a teammate told me that he had noticed that he had noticed that the aberration patterns created at the focal plane of the focusing lens changed drastically when the lens was tilted. This was an important observation because these aberration patterns create dark pockets in the light which are exactly what we need for particle trapping. I then designed an experiment to test how aberration patterns changed when the focusing lens was rotated relative to the incoming laser beam (Fig. 3). This design also allows for future measurements using the Poisson Trap if it can be shown that this trap design is worth testing. Variations on this experiment are still being conducted.

Preliminary results suggest we can maintain a stable trap at over 3g’s of acceleration and maximum speed of 1.5m/s. Experiments are ongoing. Once we are done doing our regular trapping strength vs lens angle measurements, we plan on introducing the beam block back in like the Poisson setup to see if it helps at all. So far, our most limiting factor in the way of conducting experiments is equipment and not necessarily experimental parameters.