Our goal was to implement scattering transforms as a mathematical representation of materials.
The intention of this project was to build intuition on this technique using model data in one and
two dimensions. The tools created here will be used as templates in further projects on real
materials data. The intuition built during this project is crucial to the machine learning
framework for materials design that we hope to build in the near future.

Because scattering transforms use wavelet transforms, one of the first obstacles was to decide which type of wavelet was the most appropriate for scattering transforms in materials. Despite the existence of many different types of wavelets, in our tests we use Morlet wavelets. Morelet wavelets are a complex exponential windowed by a Gaussian function. Morlet wavelets are attractive because they are continuous, differentiable and they capture the features of atomic densities better than other types of wavelets. This means that they are more suited to mapping atoms than other wavelets.

Once we decided which type of wavelet to use in our scattering transforms we needed data that we could use to test and validate our scattering transforms and our machine leaning on. For test data we used the Lennard- Jones potential to create chains of atoms that are spaced such that they are in their lowest energy state. This is favorable because nature tends to favor lower energies. These chains consist of any number of atoms of 2 types. The chain pictured in figure 1 has 10 atoms. In practice we use similar chains that include hundreds of atoms. Once we have the positioning we fit them with a Gaussian surface to mimic the atomic densities of real atoms as in figure 2. As it creates these chains the code calculates a corresponding energy for each chain. Figure 3
The code that produces the test data was written to be modular and has the ability to create 1D as
well as 2D atom chains. It also has functionality built in to allow the mapping of any binary atom
system. In our calculations to create the data set, we used toy values as the parameters for the
atoms in the chains. This allowed for faster calculations as well as cleaner data and easier testing.
The modular structure with which the data was constructed was built such that we can change
these parameters in the future to match well known binary atom chains. 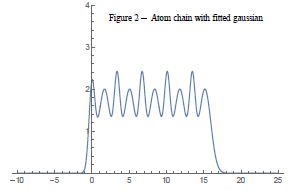 With a good set of model data to test with, the next step was to write code that could take the
scattering transform of each atom chain. At its core the scattering transform code is a
multilayered wavelet transform from which we save some critical information. Figure 3 is a
basic diagram of how the scattering works. The large black circle represents the original data.
The orange arrows represent math that we do to get to the data that we need. The orange circles are the
scattering coefficients. This is the information that we save and later give to the computer for machine learning. The black arrows represent wavelet transforms that are methodically scaled to cover the entire original function. Each black circle in the lower tiers represent a different scale. We again save the scattering coefficients and repeat the process until the
desired resolution is achieved. 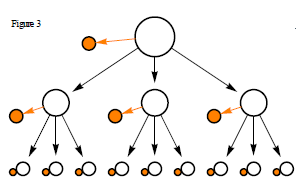 Our goal is to give the computer a set of these atom chains with their scattering coefficients and
then ask the computer to predict what the energy of the chain should be. This is done by creating
a large data set of hundreds of chains of atoms and allowing the computer to learn on a subset of
that data. This subset is called the training set. Once the computer has been trained, it is then
asked to predict the energies of chains that it hasn’t seen yet. These predicted energies are then
compared to the energies that were associated with each chain as we created them. This allows
us to see how well the computer is learning our data

Over the course of the project we designed and tested several tools including all of the
components necessary to machine learn with scattering transforms in 2D. Currently we have
created tools that allow us to find the scattering coefficients of 1D atom chains. We have also
written basic machine learning code that splits large data into training and test sets. This code
currently allows a basic regression with random data. We are working on configuring this code
to accept the scattering coefficients that our scattering code produces. We also created a modular
data set that we can use to validate that our tools work in 1D and 2D. The next step is to couple
these pieces and to use them to do machine learning on our data set in both 1D and 2D. We will
then tune the input parameters to better represent the physical world.

Although this project has taken much longer than expected, we have made solid steps towards
having a functional 2D model of machine learning with scattering transforms. Overall this
project has helped build much of the intuition that is needed to expand this technique to real data
thus producing real steps forward in the materials science community.