Currently there are several common considerations to factor in when designing furniture for the consumer market such as ergonomics, color trends, manufacturability, materials, regulatory standards, shipping costs, economic forecasts, etc. The objective of this exploration was to research the psychological effects of design elements, such as color and texture, for the purposes of applying lessons learned to the design of furniture that contributes to a positive emotional state.

I chose to narrow my focus on designing specifically for depression because while it is estimated that one in five American adults suffer from various mental illnesses, depressive disorder is the most prevalent mental illness in both the United States and in other high-income countries. The financial cost burden of mental illness has been estimated to be greater than the costs of respiratory disorders, diabetes, and cancer combined [1].

I started my project by initially reading 10 peer reviewed articles from scientific journals that highlighted how design elements affect individuals. I learned that people in a negative mental state were more influenced by their tactile senses and those in a positive mental state were more influenced by visual stimuli such as color [2]. I would then create a series of physical objects inspired by their research to help learn how to apply their discoveries and get feedback from my instructor and peers (Figure 1).

I concluded that the furniture I would create would have to be specific to an individual, but as consumer furniture needed to be reproducible. Because of this I created a 3D model of my design that could be adapted to the end-users measurements and extracted flat patterns for both the internal structural elements and the external upholstery. I cut the internal structural components from ½” Baltic Birch plywood on a large flatbed computer numerically controlled (CNC) milling machine. The internal structural skeleton was designed to fit together with minimal screws and I cut out the extraneous plywood material that didn’t affect the structural integrity to minimize weight. A hard lightweight foam was used between the plywood skeleton to maintain the form and I attached a soft memory foam to the frame in the area where an individual sits to increase comfort. The upholstery consisted of a soft fleece material adhered onto ½” thick foam and cut out with a laser cutter for precision. An exaggerated texture was then embroidered onto the upholstery panels before they were sewn together on an industrial sewing machine.

The chair I designed, made, and exhibited incorporates insights from my research on the psychological effects of design elements, specifically focusing on tactile elements and softened visual profiles. Because any particular color can invoke a variety of reactions I chose to make the chair grey with small embroidered highlights.

I initially focused a lot on color and form, but as I read more about color psychology I discovered that perceptions of color were highly individualized and situational. For example, one study found that individuals who wore the color red perceived as more attractive, but another study showed that seeing the color red before a test can negatively affect your performance [3, 4]. Another study showed that while the general population preferred the color red over any other color, individuals that have previously been prisoners of war and dealt with posttraumatic stress syndrome will rank it as their least favorite color [5]. It should be noted that designing consumer products with considerations for positive mental health would only be part of holistic solution that includes medical treatment.

Furniture and other physical objects can influence a person’s mental well-being. However, because of the ever changing nature of an individual’s mental state, in addition to cultural identity and past experiences, furniture would either have to incorporate dynamic attributes like the ability to change color or be designed specifically for each individual. I believe with the increasing popularity of parametric 3D computer CAD modeling, future consumer furniture will be able to be individualized based on input criteria about the consumer. My project has helped me discover the beginnings of global awakening towards integrating insights from neuroscience and psychology into designing consumer goods. Figure 1 – Early exploration in creating an exaggerated texture around a soft form. 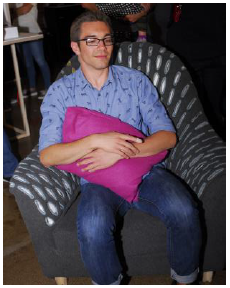 Figure 2 – This photograph shows an individual sitting in the prototype chair during a public design exhibition in Salt Lake City, Utah in April of 2015.