The intent of this ORCA project has been to explore the relationship between the West (specifically the U.S.A) and Middle East through a new perspective: fashion. With the help of my mentor, Mary Farahnakian, who immigrated from Iran, I studied Middle Eastern fashion identifying elements that have transferred in to Western fashion or vice verse. I then designed a fashion collection inspired by this research, which will be presented at two (or more) events in 2016.

Researching fashion was somewhat of a challenge for this project, as there is little scholarly writing about Middle Eastern fashion. I had to draw on some unconventional sources to get an idea of fashionable hijab1 worn by modern Middle Eastern women. Fortunately, I was able to study some actual clothing pieces from the Middle East through a small collection owned by Mary Farahnakian. From these I noticed a trend toward bright colors and patterns, especially floral, and the frequent combination of several fabrics in one garment. Each garment tends to be heavily decorated with embroidery and beading, which makes up for the simple construction and silhouette; Middle Eastern clothes trend toward draping the fabric rather than fitting it to the figure. This can be seen in garments such as the abaya (a loose fitting dress typically without sleeves), salwar (baggy trousers), tunic and turban. Scarves are worn in a variety of ways with each outfit, adding to this draped effect, in addition to the veil worn by many Muslim women.

I found that all of these Middle Eastern trends are manifested in Western fashion as well, although somewhat modified and freed from the constraints of hijab. Salwar, in fact, were the first pants worn by women in America, promoted by the political activist Amelia Bloomer from whence they get their Western nickname “bloomers.”2 Influences of the salwar are still seen in modern fashion, as in the popularly termed “harem” pants. Middle Eastern embroidery is common in many boho (bohemian) styles, and the abaya has been shortened to create a loose style of blouse often worn with leggings (leggings themselves are very similar to a Pakistani style of salwar). During the 1940s, turban styled hats that sometimes included a veil were very popular, although this fad has mostly died out with the exception of cancer patients who still use variants of the turban as a type of head covering. These trends, among many others, parallel traditional fashions of the Middle East, indicating the free exchange of ideas between the West and East in fashion.

After discovering these correlations between Eastern and Western fashion, I began designing my fashion collection inspired by the Middle East. I collected fabrics with embroidery and patterns similar to what I found in my research, and combined multiple fabrics into one outfit. Mary Farahnakian gave me an antique piece of silk, handprinted in Iran, which I incorporated into my designs which consist of modified forms of the abaya, salwar, tunic, Persian slipper and entari3 (Figure 1; Figure 2). Although I originally proposed to do this fashion collection at half scale, which I could then take around to local schools to present, I was accepted into Utah Fashion Week 2016. I changed plans to make the collection full scale instead, so I could present my designs on the runway and hopefully reach a larger audience. This lengthened the construction time considerably and I will probably not finish the collection until February of 2016, just in time for the fashion show. Afterwards, I will apply to exhibit the collection in the Harold B. Lee Library, and in May I will travel to the national Costume Society of America Symposium in Cleveland, Ohio where I will present the collection to professionals in the fields of costume and fashion design. Overall, the fashion collection will receive much more publicity than I had hoped for originally. 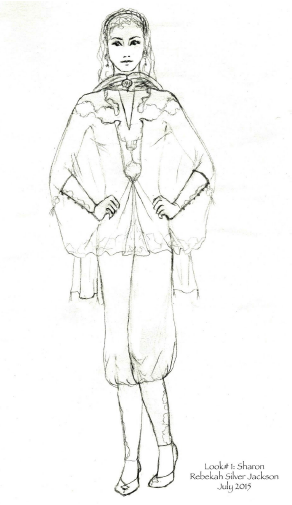 Figure 1 – Outfit #1. Based on a shortened form of the abaya, salwar and Persian slippers. 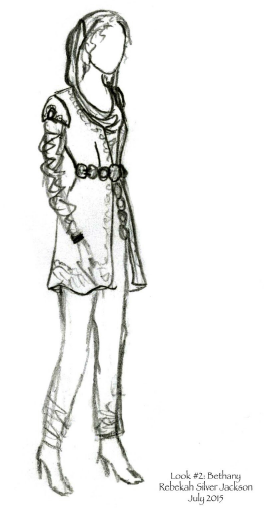